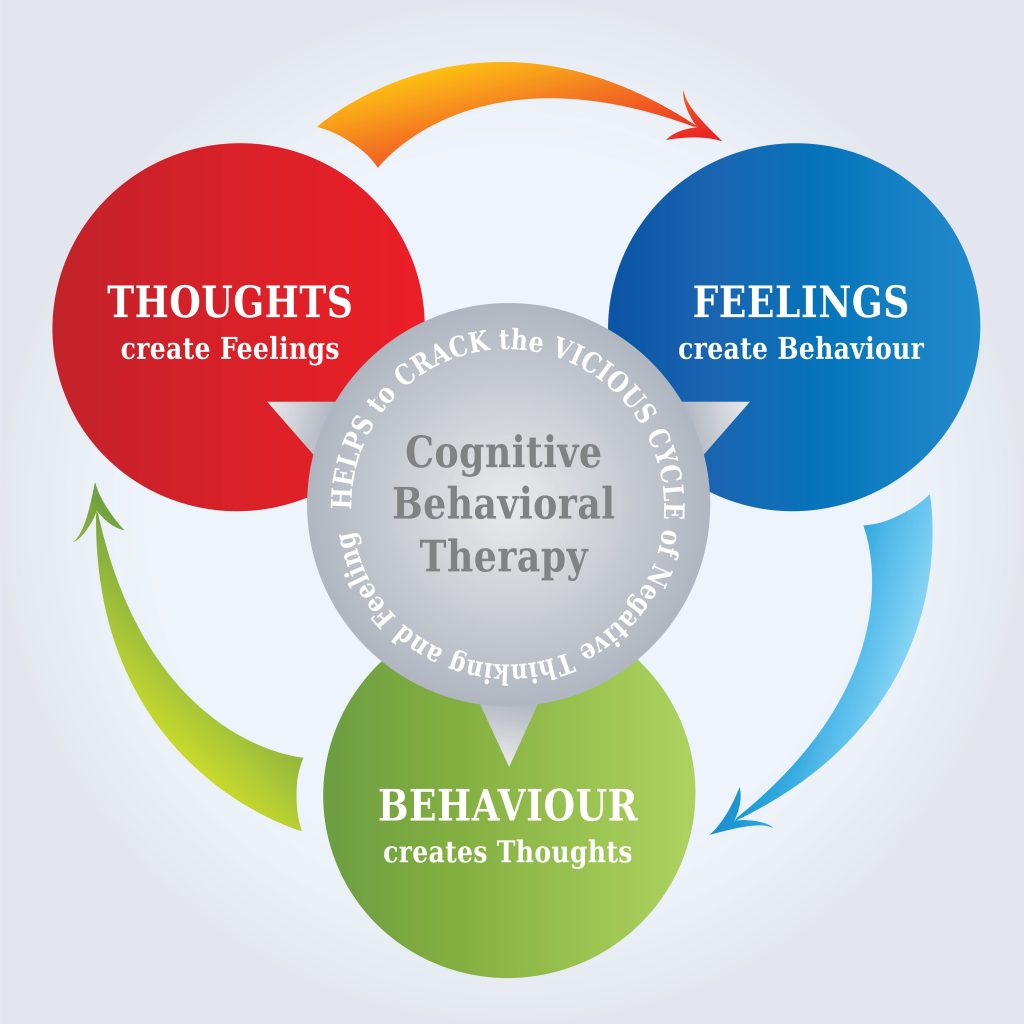 What Is Cognitive Behavioral Therapy (CBT) ?

The objective of Cognitive Behavioral Therapy is provide the client with one effective approach to the achievement of good mental health. This approach is based on the recognition that people experience and accept a variety of cognitive distortions in their thought processes which damage their healthy thought processes. These are thoughts, beliefs, and attitudes which affect their regulation of emotions. They are negative thoughts leading to negative mental health.

What are some common cognitive distortions?

This is one of the most common. Polarized thinking believes that everything, particularly aspects of the personal or larger external environment are seen as either black or white. This mistaken thought process does not provide for a “middle ground.” Everything must be either back or white. A common result of black and white thinking is to categorize or interpret situations or people in “either/or” classification. Someone is either 100% right or 100% wrong. But life and people are not that way, 100% of anything. Polarized thinking believes that people are either right or wrong, making the false assumption that there are no shades of gray in situations or people’s thought. This mode of thought always wants to and interpret aspects of life into a duality of only extremes.

This incorrect mode of thought is associated with polarization of thinking in that to polarize people or situations, it is necessary to overgeneralize about them. Over generalization is a faulty thought process which takes one element of a person’s personality or behavior or of a situation and asserts that it is the only element that matters and that element characterizes the person’s total behavior, making nothing else to be considered to be relevant. An example of this kind of though is the common belief that, in regard to woman, that “all blondes are dumb.” In fact, the IQ’s of blond women is not significantly different from the IQ range of all women or men and women in general. But, people believing the mistaken generalization and “all blondes are dumb” have let the mistaken generalization affect their opinions of all blond women. In regard to one’s own personality, the generalization that “I am not good in school” is a mistaken generalization leading the person to expect low grades, and by doing so, not working as hard in studying, so they get low grades. Thus, these mistaken generalizations can become self-fulfilling prophecies.

Many of the cognitive distortions, like black an white thinking and over generalizations are linked: For example, through black and white thinking, one overgeneralizes about the focus of interest, and mistakenly comes to some conclusion about it: the over generalization that “all blondes are dumb” is a result or black and whit thinking (black and whit thinking indicated that blondes are different from every one else, The person then overgeneralizes, if one blonde is not too smart, then all blondes must also be dumb, and that is their conclusion is their cognitive distortion, that “all blonds are dumb.” On a more personal level, in dealing with other people, a person takes one element of another person’s behavior, and overgeneralizes from that about the person as a whole. For example, if one votes Democratic, the person judging them comes to the mistake conclusion that the person is a “raging liberal” which is a mistaken judgment overgeneralized from insufficient evidence. Over generalization is one of the most common cognitive distortions.

Associated with over generalization is the imagining of catastrophes or disasters. This is the expectation that, in whatever situation the person is confronting, they see only the worst possible result. They expect everything to go wrong. If they are confronting a test, for example, instead of rationally thinking about the situation and studying hard for the test, they believe that whatever happens, they will fail the test. This cognitive distortion can also become a self-fulfilling prophecy: If the person believes they will fail the test no matter what, they may not study appropriately, and, therefore, fail the test. They will then use this example to justify their mistaken thought processes validating their cognitive distortions in foreseeing the future in terms of catastrophes and disasters.

These are some of the most common mistaken ideas or attitudes, cognitive distortions, which adversely affect mental health.

Cognitive Behavioral therapy takes as its objective the identification of the significant mistaken ideas and attitudes, cognitive distortions, in the client’s thinking which are producing the most serious problems in his or her mental health, thought processes, and behavior and determines effective ways to combat them and return the client to healthy thoughts and attitudes leading to improved mental health. This improvement positively carries through to his or her personal life and interpersonal relationships. Thus, the visit to the psychologist is the first step in dealing with these cognitive distortions.