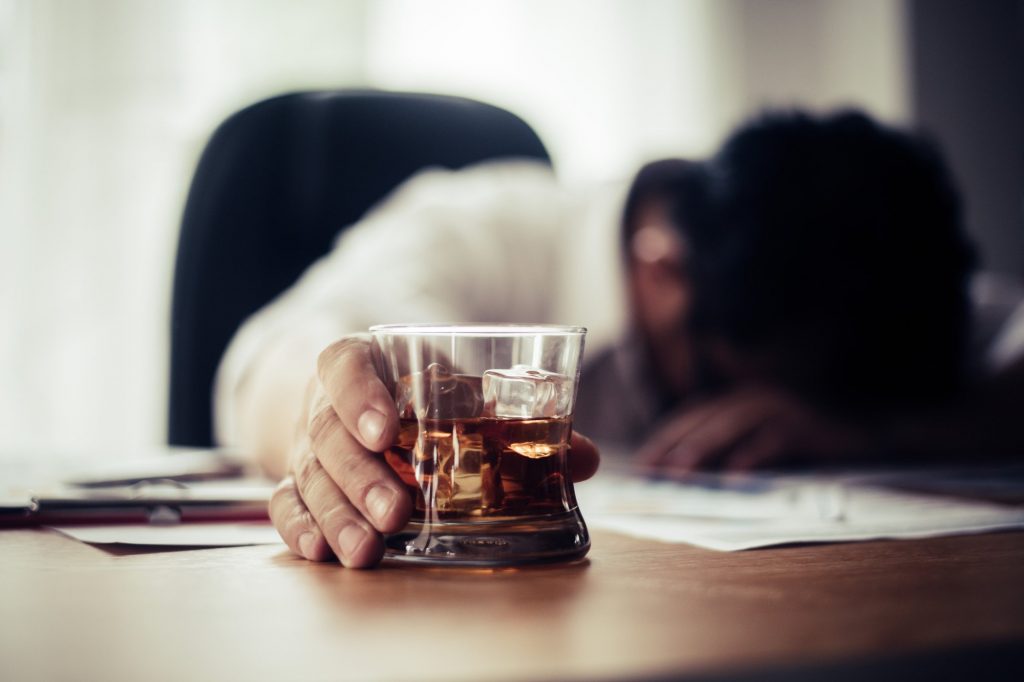 Spot These 8 Signs of Alcoholism and Seek Help

The difference between a casual drinker and a high-functioning alcoholic can often seem minor.

For those who are questioning their behavior around alcohol for the first time, both denial and confusion get in the way of accurately assessing their condition.

Fortunately, there are actually some benchmark signs of alcoholism that will help you know for sure.

If you’re questioning if you or a loved one is a heavy drinker or an alcoholic you’re in the right place. Read on and we’ll show you some metrics which will give you a definitive answer.

The classic symptom of alcoholism is easy. Drinking alone usually points to someone having a problem.

For most people drinking alcohol is a social activity. Something to cut back on inhibitions and allow people to loosen up.

Those who drink heavily while alone most likely have some level of alcohol dependence going on. Whether they’re drinking away withdrawals in secret or simply isolating themselves from the world with a bottle of Scotch… drinking alone on a regular basis is one of the clearest signs that you’re headed down a bad road.

Blackouts are still under study since the precise mechanism is complex.

While most people get a bit forgetful after a few, alcoholics often find that blacking out occurs regularly during the course of their drinking career. In some cases, an individual may not even be aware of the blackout, particularly if it’s fragmentary instead of a complete loss of memory.

Blackouts are one of the primary indicators of alcoholism and often begin to occur early in a problem drinker’s “career.” If it’s happening to you it may be time to step back and take a serious look at your habits.

While this would seem to be a great indicator, many people overlook it.

If you have trouble putting the bottle down after you’ve picked it up you’re likely to develop a problem. There are quite a few people out there who reason that since they don’t drink every day they’re just fine.

Nothing could be further from the truth.

For those who find themselves without the ability to control their drinking once they start it’s a pretty clear indicator that hazardous waters lie ahead.

Secretive behavior centered on alcohol can occur in many different ways. Some might sneak away to nip the bottle periodically throughout the day. Others might hide how much they’re actually drinking in social situations.

Often the hidden behavior is accompanied by a sense of guilt and shame, pushing the alcoholic further and further into the cycle of self-destruction.

It’s normal to wake up with a headache, nausea and feeling groggy after a big night out. Hangovers are just part of drinking, even if you only occasionally over-indulge.

It’s not normal to be shaky, suffering from anxiety attacks, or experiencing an irregular heartbeat.

Many of the symptoms of physical dependence on alcohol get passed off as a particularly bad hangover. The difference is pretty staggering for those who’ve experienced both.

If your hangovers are increasing with severity as time goes on and new symptoms are occurring there’s a problem. There’s a big difference between a hangover and withdrawal symptoms, be sure to know the difference if you think that there may be a problem.

Not every legal issue that involves alcohol is necessarily a problem. A single drunk in public, for instance, could have just been the result of misjudgment of a situation.

On the other hand, if you’re clocking up a DUI once a year and spending weekends in jail on a regular basis you’re likely an alcoholic.

Ignoring the legal issues around alcohol use or passing the blame on to others is a classic sign of the alcoholic. A normal drinker probably won’t repeat the behavior which got them arrested in the first place.

An alcoholic will just keep going, regardless of the consequences.

Of course, not all charges necessarily involve alcohol directly. Criminal activity, both minor and major, is heavily tied to alcohol abuse.

Fighting, petty crime, and other unsafe activities resulting in legal action can often be traced directly back to alcohol as the root cause.

Those who are in the grips of alcohol dependence will often display extreme mood swings and erratic behavior… even when they’re not drinking. It can be hard to diagnose in yourself but others will have undoubtedly noticed if things have progressed that far.

If others are questioning your behavior, even when you’re not drinking, it’s time to take a closer look at things.

8. Going for the Hair of the Dog

Drinking first thing in the morning is something which not many people can ignore. It’s garden-variety alcoholic behavior.

However, some people don’t see it that way. Instead, they see themselves as simply driving off the hangover in the morning with another drink. They may even not have another drink until they get home.

Still, regardless of where you think you’re at, reaching for a drink first thing in the morning is undoubtedly one of the clearest signs of alcoholism you’ll ever see.

If you or a loved one are showing signs of alcoholism it’s time to get help. The disease of addiction is a progressive one and without treatment, it’s nearly impossible for someone to break the cycle.

When it comes down to it, your health and wellness depend on you getting better and stopping your problematic drinking.

Is it time to seek help? If you think so then contact us today.